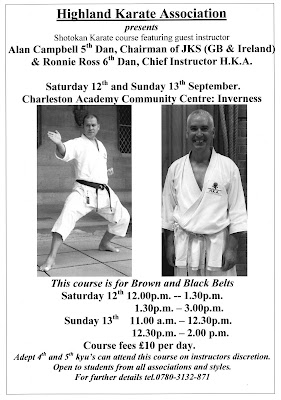 Campbell Sensei sent me details of a joint course he is instructing on with Ross Sensei 6th Dan
Chief Instructor HKA. If you would like more details please phone Sensei Alan
Click on the yellow button below to return to the "HOME" page 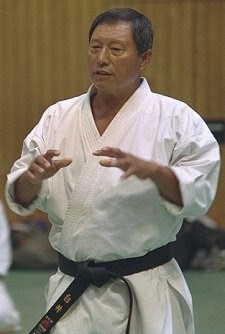 Above : Hiroshi Shirai Shihan - 9th DanWSI
Shirai Shihan was born on 31st July 1937 in Nagasaki, Japan and started Karate in 1956 in Komazawa University.
His instructors there were Nishiyama & Tsujima Sensei. He received his Shodan in 1957 with Yamamoto and Kano Sensei.
He then attended the JKA Instructor's course from 1960 to 1962 with Watanabe, Kano and Nakajama where Nakayama, Nishiyama, Kase & Sugiura Sensei were his instructors. This was the course after Asai Sensei. He won the Japan Championships in 1962.
Sensei Shirai became a 9th Dan in 1999. He is the head of the World Shotokan Institute (WSI) and has been based in Italy since 1965. 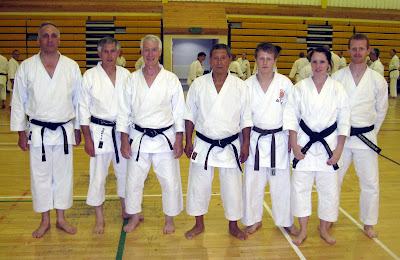 Above : Shirai Shihan with members of IJKA Yorkshire

Gullen Shihan, Gude Sensei, Simon, Rebecca, Michael and myself travelled the 500km round trip to Birmingham today to train on the Goshin Shotokan Karate Do course. Both Shirai and Kase Shihan were a big influence in Sensei Andy's karate. I could recognise the way Andy builds his Kihon and develops his kumite drills from what we were taught today. Shirai's karate has a strong feel of Budo, the single 100% attack with nothing held back.

To me the training had a feel of Hangetsu, we would start with application and then train Goshin kata. A feel of strong controlled techniques starting "uchi" so that a rapid second technique could be blocked and countered. Techniques were practiced with attacks first in four and then eight directions. Defences were also executed with the attacker stepping in, walking towards or from behind, each time being subjected to a double attack.

Everyone will take away something different from the course, but for me I felt that I could react and turn 180 degrees in defense quicker than normal in the Goshin style stance.

I posted a couple of videos in the Asai Ryu kata section of the blog.
A version of Kibaken Sandan from IJKA Bulgaria and a slow version of Junro Yondan from Johannessen Sensei 4th Dan JSKA , enjoy.

We were keen to start training at Hambleton as early as possible, despite it being the start of the school holidays. Unfortunately both Sensei Andy and myself were not able to get there, so it was down to Becks to step up to the mark.
I think she was glad to see that Senpai Ian was there, even though he was happy to let her teach and he joined in with the training.
Beck's started with normal warm ups and went onto kihon, half steps forward and back with blocks, punches and kicks.
The session was finished off with kata Heian Shodan and Nidan. As a relatively inexperienced instructor Rebecca probably pitched it just right. She taught the basics she has done with Sensei Kato, session after session and with a small but mixed group of grades focused on techniques and kata that they were experienced in.
Hopefully it will boost Rebecca's confidence in instructing and was an enjoyable session for our members.
Hope to see you all this Wednesday.

Due to school holidays we will be unable to train at Barlby High School on Sundays, from the 16th to 30th Inclusive. However we have arranged to train at Hambleton school for these Sunday sessions from 17.30 to 19.30 hrs.

We look forward to seeing as many karateka as possible at Hambleton.

Click on the yellow buttons below to return to the "HOME" or "Hambleton School" to get a map and directions to the school .

Following your requests at the SSKC AGM we have made arrangements for a 2nd training night for graded SSKC members.

We have made arrangements initially for 3 months and will make permanent arrangements once we can fully assess take up. The facility will be open to all SSKC graded members to allow you to improve your depth of karate knowledge between grades, rather than concentrate on core syllabus only.

Long-term we will have to set a rate which is self-financing for those members that take part, but initially we will require a 4 weekly subscription of £10.00.

We look forward to seeing as many karateka as possible at Hambleton.

Click on the yellow buttons below to return to the "HOME" or "Hambleton School" to get a map and directions to the school . Our charity efforts in aid of Facing Africa have run for approx a year, I have just made a final donation of £100 and have removed the online link from the blog.

The total raised was a staggering £1174.51, I would like to thank all those who contributed.

Kelvin still has a close association with the charity and would be happy to supply further information to anyone that requires it.

The return of a Robinson 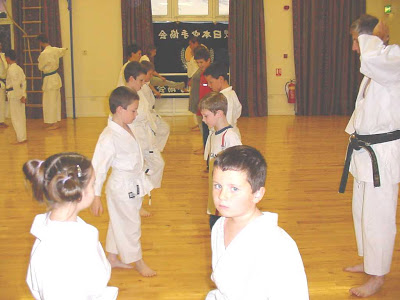 Gullen Shihan looks a little puzzled, I am sure it is not the very young looking Joshua Robinson causing him concern?

He looks 600mm taller and 300mm boarder than when he last trained with us. I have just been back though my records and the last training session was when he was seven in 2004. Five years later he is built like a rugby player! ( I hope I have the right picture? I am sure Gillian his Mum will tell me if I have it wrong) Joshua is the younger brother of Thomas, who won the Trevor Jinks cup a few years ago.

I posted a couple of videos in the Asai Ryu kata section of the blog.
A version of Seiryu from Mexico and Hachimon from Israel, enjoy.

I have posted a number of "you tube" videos under individual pages for Shotokan Shihan from our association and many other, enjoy!

Click on the yellow buttons below to return to the "Shotokan Shihan" or "Home" pages.

Look after my Licence!

Mike Betts has been training with us since February with his daughter Shauna. Mike was returning to Shotokan after a long break and decided that now was the time that he could share his love of Shotokan with his daughter. It is not easy returning in your 50's, your mind can remember the katas, but the body struggles to return to its earlier flexibility.

Mike just put his white belt back on and got on with his training. He regularly joins in with the higher grade training at Selby and also attend sessions with Gullen Shihan in York.

Mike happened to have his old KUGB licence in his bag, so I asked him if I could take a copy. He explained that like so many his original licence had been lost, but his replacement had his last three grades registered. His parting words as he went to get changed..."you will look after my licence want you?"

Sensei Andy and Rebecca presented pupils with a certificate to celebrate the completion of there introduction to Shotokan Karate. 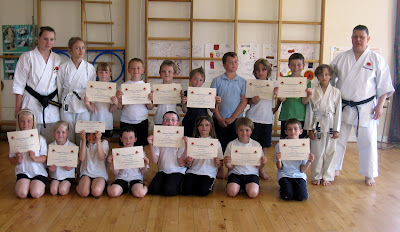 Leila, Liam and Abby (not in the photo) as SSKC members helped out with the sessions and provided the beginners with someone to follow. Thank you to the three of you.

SSKC have put together a special package with Actice Selby for students who have just completed a 10 week taster session at Barlby Hilltop and Barlby Bridge Primary Schools. Pupils are being offer a 3 month discounted course and a free karate Gi if they want to continue with their study of Shotokan. Any student who takes up the offer will be ideally placed to take a formal IJKA grading in the Autumn with Kato Shihan when he next comes to York.

I have just completed the CSN returns to the local authority and was very pleased with our contribution to the community. Sensei Andy and Rebecca have provide 358 pupil hours of instruction to the schools, with a fairly even split between boys and girls.

Tia Louise Hardy was born 23rd June at 06.06hrs and weighed in at 8Lbs 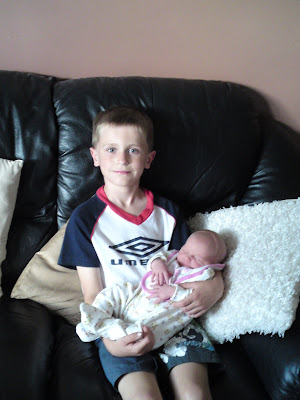 Above: Tia with Big brother Josh

looking forward to seeing you all soon, OSU! (not too loud if she is sleeping)