Above : The SSKC 2010 Xmas photo
The bad weather conditions have taken a toll on the annual club photo.
A great display was put on for family and friends along with a review of what we had achieved during 2010.
Unfortunately this years winner of the Trevor Jinks Cup was unavailable due to being a little poorly, but now it gives me a chance to get the cup engraved with Jamie Bellerby's name before we are back to training in the New Year.
Jamie, not the most natural karateka has matured a lot over the last 12 months and when he tries hard shows a lot of potential. I am sure 2011 will be the year where we see Jamie apply himself and develop through the mid Kyu grades to Brown belt and beyond. Congratulations Jamie!
Hope you all have a Merry Christmas and a happy New Year.
Osu!
Click on the yellow button below to return to the "HOME" page

Back into the Kitchen Part 1

York Kenshinkan Karate Club are hosting Sensei Richard Heselton on Saturday 11th December...look forward... I will post full details when I have them.
Full details - Training 1.30 to 4pm
Cannon Lee School - YO30 6ZS

Just had a call from Barlby High School and training is on for tonight.
C U There, Osu!

Kanazawa Shihan has reportedly taught for the last time in the UK and Ireland.
He will now limit himself to Japan and is likely to leave international travel to his son and other senior instructors.
The interview below was recorded 3 years ago, but gives all karateka a lot to think about going into a new year. 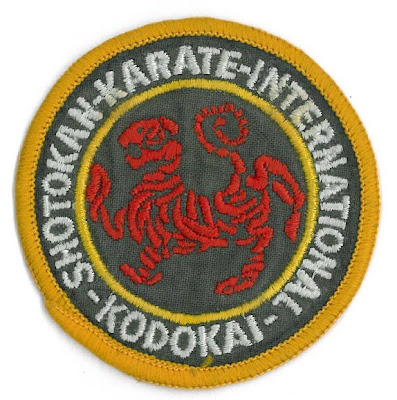 The badge above was recently given to me by an Ex member Sensei Luis Bastidas who joined the SSKC back in 1982 as a school boy (more details in the old members section)
Shihan Ne Rei, Osu!
Click on the yellow button below to return to the "HOME" page

Above : The Disability Martial Arts International Association
Selby Shotokan Karate Club are now registered on the database of the DMAIA, as a club that is interested in receiving enquiries from disabled members of our community.
The Disability Martial Arts Association is a wide ranging support network for people with all types of disabilities. They have a fundamental belief that people come first and disability is second.
Each year approximately 1,000 men, women and children become paralysed due to an accident or illness. Through sport these people whose lives have been traumatically changed, can have an outlet for their frustrations and energy. By focusing on something they can do, and potentially can excel in, increased confidence and a positive outlook can be achieved and this can influence other areas of their lives.

The main aim of the charity is to promote martial arts and raise awareness, of people with disability’s who wish to return or take up martial arts and improve their health and a have a better way of life.

Click on the yellow buttons below to return to the "HOME" page or Disability Martial Arts International Website.