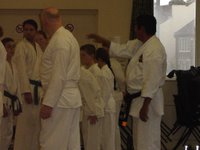 It is an experience to train with Sensei whatever your age or experience, his courses will have something for everyone from the beginner to the most experienced Karateka 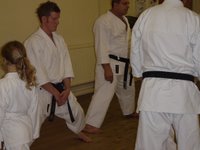 On the Saturday Kato Sensei concentrated on Kihon (basics)

Left: Ash covers up while the juniors practice Mae Geri Chudan (sometimes there is a little confusion between chudan and gedan) 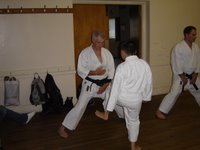 Left : Mike partners Daniel, it looks like Daniel has brought his knee up high enough, Sensei is safe from the Gedan Geri. 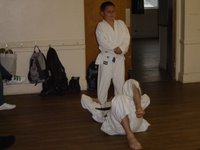 Left: Mike has a chance to return the favour, kicking mae geri to Daniel 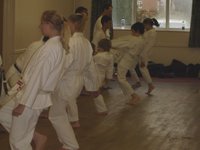 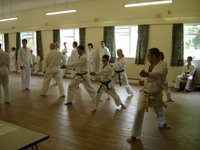 Left: James, Andrew, Adam, Claire and Fiona going through their paces at the kihon table with Sensei Ash and Steve. 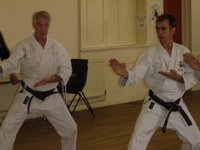 Left : Sensei Mick and Sensei Steve were also put through their paces by Kato Sensei. 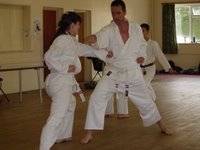 Left: Jo and Tony from the York Club, performing kumite (sparring), they also train with us at Selby when they get the chance. The extra training obviously paid off because they got a special mention from Kato Sensei when their certificates were presented.

The standard from all Karateka was good and our congratulations also go to our friends from the York and Haxby Clubs.

Our thanks also goes to Sensei Ian for arranging the weekend, ItÂs a thankless task and is appreciated. Osu!

Keep training hard and look forward to the next course and grading early next year.