At the weekend Rebecca, Michael and Paul are travelling to Fermoy in Co. Cork to the IJKA Irish Open Shotokan Championships.

We all wish Rebecca and Michael all the best, they will compete in the same group for the U19 Kata (Mixed) 5th Kyu to black belt section. The Kumite is divided male and female brown and black belts competing together.
They will also have the opportunity to enter the senior division as well, we will just have to wait and see on the day. 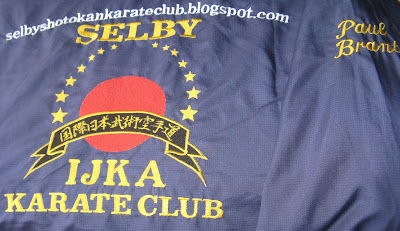 SSKC Tracksuits are now available, we will be placing an order mid October so if you would like one please let Paul know ASAP, thank you.
Click on the yellow button below to return to the "HOME" page

Many thanks to the karateka that recently posted this video on You Tube of our late master, Asai Sensei. Unfortunately I can not embed at the request of the person that uploaded the video, but it is 9 minutes of sheer motivation, enjoy, Osu!
There is a lot of Sensei kihon kata that I have never seen before, this must be the best Asai video clip I have ever seen, it might take a while to upload but well worth it.
Click on the yellow buttons below to return to the "HOME" page or "Asai Shihan Video"

Above : JKS Veracruz, Mexico - Asai memorial training 2009
Click on the yellow button below to return to the "HOME" page 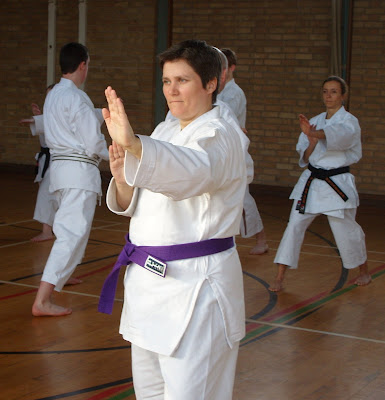 Just eight weeks after Tia was born Claire is back training. Claire was in her Gi on Sunday and I was very grateful to her for her assistance in the lower grade class, while Sensei Andy "beasted" the higher grades in the Gym.
I was able to split the class into 9th Kyu and below and 8th Kyu and above. Even when lower grades are doing single techniques they can still get confused. Having Claire out front to follow was a great benefit.
Although Baby Tia is only 8 weeks old she has attended approx 10 karate sessions, watching her big brother Josh. I am sure I saw a definite snap as she kicked out from her chair. Tia doesn't even seem to be too bothered when the class KIA!
Claire, just take it easy over the next few weeks and leave the flying kicks for next year.

Rebecca and I joined Simon and Nick from Haxby, along with Eleanor from York at Sensei Liams's dojo to train with Sensei Gary Harford. Rebecca and I have trained with Sensei before so we knew were in for a good session, and we weren't disappointed.

Sensei had us starting with correct technique, attacking with "Koshi" (ball) for Mae geri, "Sokuto" (foot edge) for Yoko geri and "Kakato" (Heel) for Usherio geri, the focus was on maai (distancing). Sensei had us kick to the wall ensuring we did not make full extension and lean away from the target. What sensei was after was a high knee position and driving forward with the hips forward of the supporting leg.

We partnered up for Gohon kumite and again Sensei commented on Maai, too many people were at the wrong distance to execute the technique correctly. We went on to practice "Teisho" (palm Heel) and "Empi" (elbow strikes) against the wall and partners.

We then were partnered up for Ippon Kumite, our challenge from Sensei was to block "Age Uke" to the Jodan attack, but then to execute either Gyaku Zuki, Teisho or Empi as a counter. Sensei's point was that you could not decide which to counter to after the attack had started, because you were not aware of the maai until then. You only had a split second to counter.

To me this was excellent training, action/ reaction, no planning, no thinking just do it. You may have not been right all the time, but it was obvious to you when you had selected the wrong counter.

Anyway after our warm ups with the KUGB I am feeling ready for another three hours of training at our own club tonight. Liam, many thanks for the invite, hopefully we can train again soon, Osu!

Harford Sensei was born in Salford, Manchester on 21/4/60. He first began Karate training in 1972, he graded to 1st Dan in 1976 under Sensei Enoeda.He was selected as a member of the first Junior KUGB Squad and competed at the 1980 European Senior and Junior Championships held in Bregenz, Austria, at which he won 1st place in the Junior Team Kata and also 1st place in the Senior Kata.
Sherry’s Sensei had an enormous impact on him which enabled him to develop. In the KUGB National Championships at Crystal Palace, his highest place was 3rd in the Kumite event and 2nd in Kata.He has won the Shotokan Cup on two separate occasions, once in Kata and once in Kumite. His main highlight was being a member of the team that for many years dominated Karate in Great Britain, Europe and the World.
Above: Harford Sensei - Go no Sen - Ippon!
Click on the yellow button below to return to the "HOME" page

I have posted a copy of Bertel Sensei performing "Shotei Dai".

Bertel Sensei is performing it as a walk through so it is ideal for those of us who are trying to remember it. Kato Shihan taught Shotei dai at our club last year, but It is not a kata that I have managed to retain. I will re-visit the kata soon because it was a kata that I enjoyed, many thanks for posting Andre, Osu!

Click on the yellow buttons below to return to the "HOME" or "Kata" pages to view "Shotei Dai" kata.

I have posted two videos of Kato Shihan teaching "Kanku dai" in Tallin, Estonia. There is a total of sixteen and a half minutes of footage, brilliant, many thanks for posting Estonia, Osu!

I was lucky enough to visit Tallin in 2006, what a wonderful city. On my return I was discussing with Sensei a wonderful medieval restaurant "Olde Hansa" in Vana Turg 1, well worth a visit, the best Bear, Barley and Meade in town. It turned out that our friends from Estonia had taken Sensei their for a meal as well. If you ever get the chance to train with Sensei in Estonia, jump at it, cheap flights and accommodation make it affordable...maybe 2010?

Click on the yellow buttons below to return to the "HOME" or "Kata" pages, to view Kanku Dai videos.

Many thanks to Neil Dallison from Howdens Joinery in Selby for their contribution to our club funds.

This is the second year that Howdens have supported our club and although in these times of the "credit crunch" money is tight for us all we are very grateful to Howdens for their continued support.

I have posted a video of Di Ichi from Latvia in the Asai Ryu Kata section of the blog. Kato Sensei taught me the first three Di kata nearly ten years ago. ( I believe there to be at least four in the series)

I have taught the first three, but I find the most useful to be the first one, Ichi. I regularly teach Di Ichi before Heian Shodan. Karateka are not assessed /graded on this kata but I feel it develops good form and especially with children, they get a sense of achievement in completing a kata.

As Shodan I recently brought Di Ichi back into my own personal training routine. I am trying to focus on my hips and stepping in a lower zenkutsu-dachi than normal (for me) and also trying to improve my gyaku zuki.

As with many Asai kata there are a few different versions of the katas name, "Di Ichi" ,Dia I Ken" of as the Sensei from Latvia writes it "Dai itsu Ken".

In some Asai kata you will also see a few subtle changes in the kata. Does this mean that the karateka has made a mistake? Probably not. Asai sensei would use kata to reinforce his teaching on the execution of a technique and would make alterations to the moves to assist students by emphasising a particular point.

My own view is that these kata were developed to improve kihon, so don't get too tied up on names or in the moves, but enjoy the kata and the development it brings, Osu!

Click on the yellow buttons below to return to the "HOME" or "Kata" pages to view "Asai Ryu"kata.