Above: Kagawa Sensei
It was the third year in a row that we had travelled to train with Kagawa Sensei. Sensei is usually in England or Scotland in the middle of March and Bex and myself can't think of better birthday treat for ourselves. 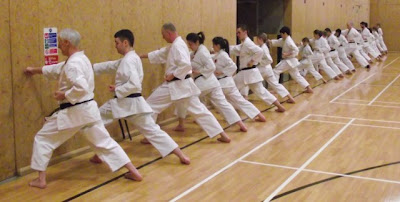 Above: Gyaku Zuki Chudan
In the foreground Sensei Mike is front of the line for kihon. Making sure the stance is correct shomen and applying force to the first two knuckles. 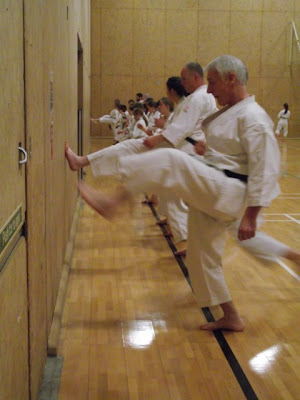 Above : Mae Geri Chudan
Making sure you kick, hips shomen with the ball of the foot.

Above : Elanor, Jim, Holly and Matt 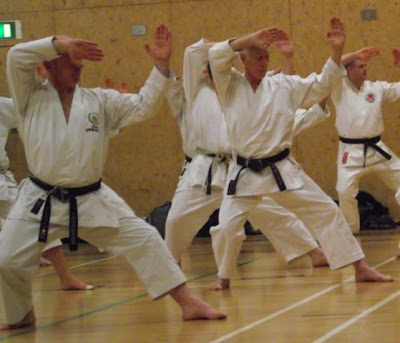 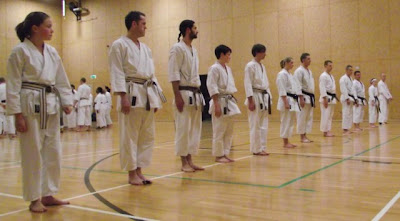 Above: The grading Line Up
Competitors ready? I have never really liked standing on this line but when you think about it all the hard work should be behind you by now. 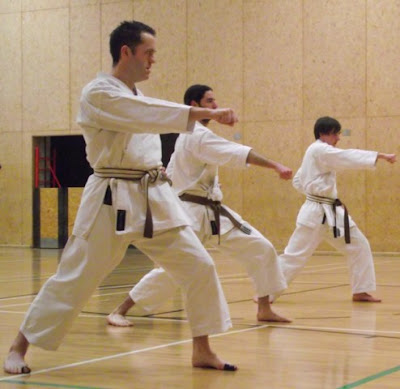 Above : Jim, Mike and Josh
During the Kihon phase of the grading, gyaku zuki.
Another of my tips to grading students is to perhaps rethink what it is that you are actually doing. Are you doing Basics, Kata and Kumite phases, or are you "alive" and doing what I would term "Kihon Kumite", "Kata Kumite " and "Kumite Kumite" , spirit, attitude, etc. 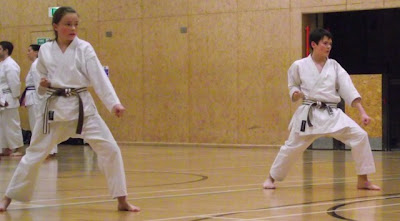 Above : Eleanor and Tom
I have trained with both Eleanor and Tom for quite a few years, Eleanor trains at YSKC with Gullen Sensei and Tom at HSKC with Gude Sensei. They are both a similar age and standard but unfortunately only Tom was successful in his grading this time.
The reason, Tom "owned" his grading, he approached it with the attitude, I have worked hard for this, I am ready, I deserve my Black Belt, I'm going to pass. If you are unsure of your own abilities how are you going to demonstrate to the examiner that you have reached the standard. Black Belts are not given away they are awarded for achieving the expected level of technical ability and performing your martial art with "Zanshin". Mental preparation is important, top tip, don't ignore it. 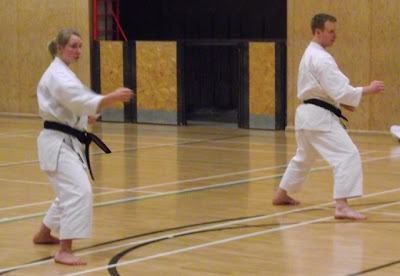 Above : Bex and Simon
Bex and Simon both performed under their best on the day, but with many, many karate hours in the bank were both successful and passed Nidan. If they both continue in the same vain for a few years I don't see a problem with either of them reaching Sandan and what is considered as the "Instructor grade". 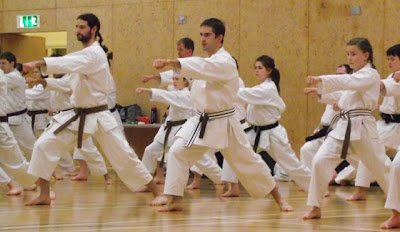 Above : Mike, Kelvin, Matt, Eleanor and Tom
It was great to see so many karateka from our three clubs at Nottingham. Haxby, Selby and York are all independent clubs, but we have very strong links, one big happy family until some shouts "Hajime!" 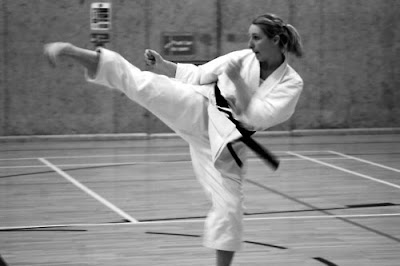 Above: Bex - Yoko Geri Kegae
I may be a little biased, but what I like about this picture is that it is natural. Bex was half way through her grading in the Kihon phase. The photo above was taken by Robert Graham, to see more of Robert's photography please click on "links" in the sidebar, then "JKS England", then click on the link on the front page.
Click on the yellow button below to return to the "HOME" page

posted by Selby Karateka at 6:30 PM