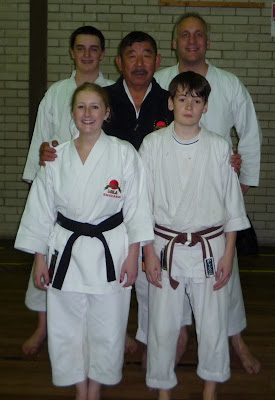 Rear: Dom Schilke & Paul Brant
Centre: Kato Shihan
Front: Helen Milner & Tom Smith
Paul and Helen collected me and Rebecca on Friday night for the journey down to my third Whitchurch course. The first Saturday training session covered intensive training from 10:30 to the 'Raven' pub lunch. The Saturday training session concluded after the meal by learning and practicing multiple new Katas with subtle variations, making remembering them a greater challenge than normal.

After a relatively early night on Saturday (2:00am!) I managed to get a good night's sleep before my grading on Sunday. Following a warm up and a few minutes of training, the karateka for the Dan gradings were called up for the grading session. Myself and Tom (from Haxby Dojo, grading for his 1st Kyu) were called up to begin our gradings with Kihon shortly followed by Jiyu-ippon with myself partnering Paul (grading for Nidan). After a breather, Tom, Paul, Helen (also grading for Nidan) and myself were then called to perform Bassai-Dai. I had originally expected to perform Jion (as my prepared Kata of choice), but had no opportunity as all of the Katas had been selected by Sensei. Following the other Dan gradings, Tom, Paul, Helen and myself performed Heian-Nidan as a final Kata to complete our gradings. We rejoined training after our gradings to complete the Sunday session with more Kata. The results of the gradings were then announced by Kato Shihan, with all who took their respective grades passing.

It has been 5 years since I started Karate at Selby Dojo under Sensei Ashley's teaching and have progressed through the ranks under the guidance and support of numerous instructors from Selby, Haxby and York Dojos. I would like to thank all those who have helped my Karate to develop to the present standard and am grateful for your time and effort (including patience!) over the years. I would like pay particular thanks to Sensei Paul for his persistence and encouragement in getting me involved with events outside of the club, such as the JKS Nationals in Nottingham and the Whitchurch courses; these new experiences have ultimately contributed towards my progression, overall attitude and confidence.
Osu.

posted by Bernard Schilke at 6:24 PM